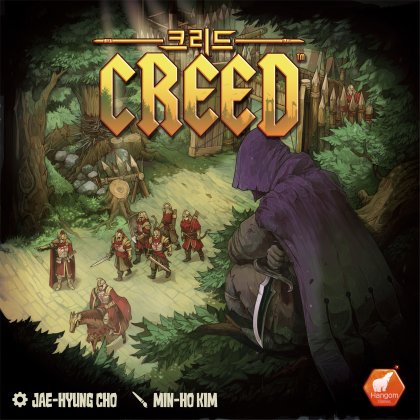 The world wants peace, but the humans cross swords with each other. The peace will come only after a bloodbath.&#10;&#10;The boardgame Creed is a strategic medieval war game using AP system. It's a game in which four kingdoms cross swords at each other insisting their own beliefs.&#10;&#10;Players pick one of four kingdoms and lead the armies in the battle field. You will deploy your units to fight on six lanes and try to find and take away the opponent&rsquo;s king and the commander-in-chief hiding in the camp while protecting your own.&#10;&#10;In order to win the game, you need to understand the specialty of each unit. And you have to use your action points as efficiently as possible. Sometimes you have to crouch down and save your action points, so you can throw a big punch later. There are some special actions that can help you achieve glory, but you are allow to use them only once or twice during the game.&#10;&#10;Every order you make is critical! Can you lead your army to victory?&#10;&#10;The game has play time of 30 to 45 minutes and can be played 1vs1 or 2vs2.&#10;&#10;Each kingdom has a very distinctive special unit and background story.&#10;&#10;Phoenixia is the most powerful empire in military power. Their heavy armored cavalries are the worst nightmare for the enemies.&#10;&#10;Xervin is the united kingdom of hunter tribes. With a good knowledge of projectiles, they&rsquo;ve developed a bow-shooting machine, ballista.&#10;&#10;Zuden is the kingdom of loyalty and fidelity. The Royal Knights who are armed with large shields and swords will never retreat from the battle fields.&#10;&#10;Magatias is a mysterious and shadowy kingdom. They might be inferior in power, but they have assassins who can easily infiltrate into enemy&rsquo;s base.&#10;&#10;