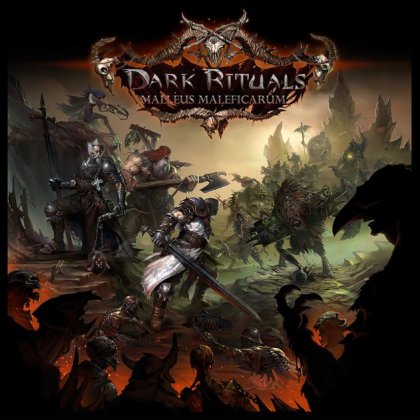 As the many planes of existence turn and churn, occasionally worlds come into alignment. For brief moments in the multiverse's timescale, these Conjunctions allow objects to slip from one world to another, sometimes unnoticed, sometimes causing chaos.&#10;&#10;One such Conjunction occurred between Earth and Neemoss, during the Dark Ages. Two dimensions could not be more different. Physics in this alternate plane is more akin to magic and its corrupting effects create worlds of monsters and cruelty. When items from Neemoss appear on Earth they are still imbued with their magical essence, which is soon discovered by healers, alchemists, fakirs and all manner of snake-oil peddlers. But things become decidedly worse when the Conjunction strengthens and the first Witches from Neemoss cross into our plane of existence.&#10;&#10;Help the Heroes master their newfound magical powers as they defend their lands from the malevolent Witches and the disciples they summon. Or control the Witches as they complete their rituals to ravage the Earth!&#10;&#10;Dark Rituals: Malleus Maleficarum is an asymmetric &ldquo;One vs Many&rdquo; miniatures board game for 2 to 5 players with an expansion for a solo mode where one player controls the Witch Master. In &quot;one vs many&quot;, a team of people control a small band of Heroes defending villagers from a single player controlling the vile Forces of Evil. All players manage a pool of stamina that is used to pay for their character&rsquo;s actions. Game play is dynamic with little downtime: turns alternate between the two forces with a player on each side taking one or two actions each turn, so long as they still have stamina.&#10;&#10;Play is organized around scenarios with unique objectives. The scenarios can be linked into a longer campaign or played individually if your group is more casual. Story driven scenarios, game mechanics, detailed miniatures and lush modular boards bring the game world to life.&#10;&#10;Can you use the magic of Neemoss to defeat the invading horde? Or will you complete your Dark Rituals to summon the ultimate evil?&#10;&#10;&mdash;description from designer&#10;&#10;