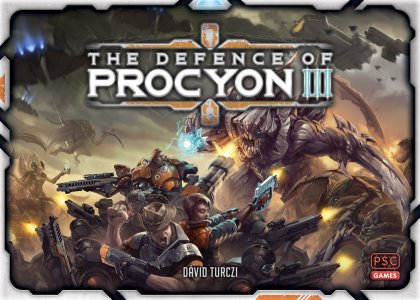 The Defence of Procyon III

Procyon is a star 11 light-years from Earth, visible in our skies as the brightest star in the Canis Minor constellation. Since the system contains the remains of a collapsed star it was bound to be rich in heavy elements, ripe for industrialization. It was thus no surprise, that in 2104 this was one of the first extrasolar systems to be colonized. The surprise came 3 years later, when an ancient artefact belonging to a clearly alien civilization was discovered under the settlement. The observatories picked up the unmistakable tachyon radiation of a fleet slowing down from faster-than-light approaching the system - preparing for the worst case scenario, the UN dispatched its entire Armada to relieve the minimal defenses the settlement holds, while their scientists worked hard to decipher the alien communications, and understand their newfound enemy whose name was revealed to be the Aethyn.&#10;&#10;Defence of Procyon III is a highly asymmetric game of four players in two teams: one player takes charge of the Alien space navy, one the Alien ground force, while the other team of the Human space navy admiral and the ground forces' commander stands in their way. The space board uses a hex board, while the ground board is a point-to-point network of locations. The game is played over 12 turns, using card driven, low luck mechanisms that quickly unfold into a fast paced game of combat strategy - presented with countless high quality miniatures in a rich, thematic world. The two commanders of a side will have to work together closely to make sure there are no weaknesses for the enemy to exploit, yet their different mechanisms and different theaters will ensure each player is comfortably occupied with their own responsibilities - avoiding the alpha player issue common in team games.&#10;&#10;The game also comes with an automated opponent that takes charge of one of the side. One or two players can play cooperatively against the opponent.&#10;&#10;&mdash;description from the publisher&#10;&#10;