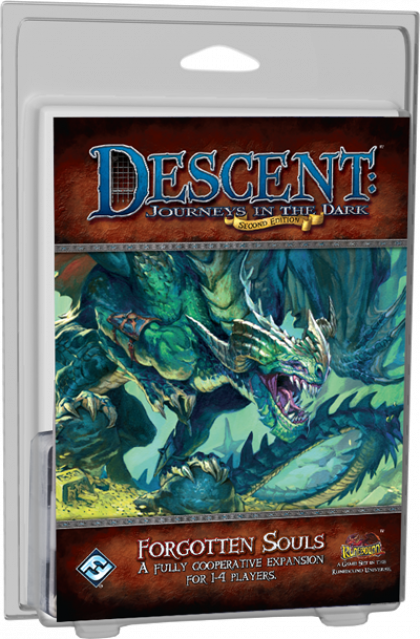 Forgotten Souls is a new cooperative adventure, allowing up to four heroes to play a fully cooperative variant of Descent: Journeys in the Dark. In a normal game of Descent, one player takes the role of overlord, commanding monsters and the forces of evil in the game. Up to four players combat the power of the overlord by playing heroes who gain experience and new items over the course of a campaign.&#10;&#10;Forgotten Souls changes the normal structure of Descent by emulating a mini campaign in a completely cooperative atmosphere. Although this expansion does not replace the normal game of Descent, it offers a variant for you and your friends to explore an expanding dungeon, passing tests and battling fierce monsters. Encounters and monsters are controlled by decks of cards, rather than the overlord in Forgotten Souls. You&rsquo;ll also grab loot and experience as you face down a series of encounters, culminating in a battle in the heart of the dragon&rsquo;s lair. Enter the darkness within Forgotten Souls!&#10;&#10;In the cooperative variant of Descent, the overlord&rsquo;s objective is replaced by the overlord track. A doom token and a fate token are placed at opposite ends of the overlord track, and you lose if the doom and fate tokens ever meet on the overlord track. Doom is an inescapable force that slowly progresses when the heroes fail encounters and in other ways. Fate, on the other hand, is a fluctuating force that the heroes affect both positively and negatively based on their progress. For example, whenever a hero is knocked out, fate advances by one, but by successfully completing a main encounter, you may be able to reset fate to its starting point.&#10;&#10;Note: Forgotten Souls was originally released as part of the 2014 Season One Game Night Kit with various accessories, including a poster, play mats, acrylic tokens, and translucent dice.&#10;&#10;The Game Night Kit came with a paper rulebook, whereas players must reference or print an online PDF with the retail edition.&#10;&#10;