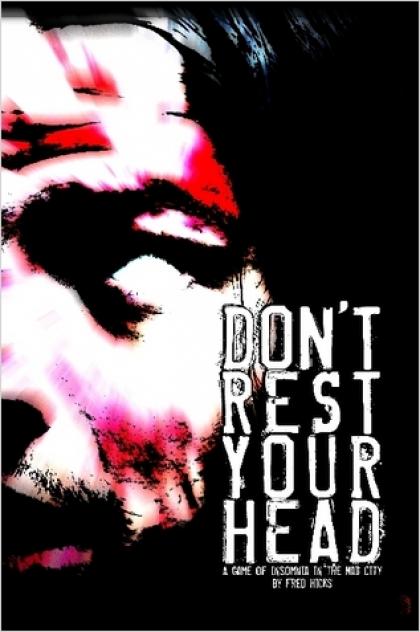 You can't sleep. It started like that for all of us, back when we were garden variety insomniacs. Maybe you had nightmares (God knows we all do now), or maybe you just had problems that wouldn't let you sleep. Hell, maybe you were just over-caffienated. But then something clicked.

That was when you took a long walk down the streets of the Mad City, stopped being a Sleeper, and started being Awake. But that click you heard wasn't from the secret world snapping into place. It was the sound of the Nightmares flicking off the safety and pointing a gun at your head.

They can smell you. The Paper Boys are closing in, and you'd better pray you don't become a headline. You're chum in the water, my friend, and it's time you got ready for it... before the clock chimes thirteen again. Now that you're one of us, there's just one simple rule left that must dominate your life.

Don't Rest Your Head is a sleek, dangerous little game, where your players are all insomniac protagonists with superpowers, fighting-and using-exaustion and madness to stay alive, and awake for just one more night, in a reality gone way wrong called the Mad City. It features its own system, and is contained entirely within one book.