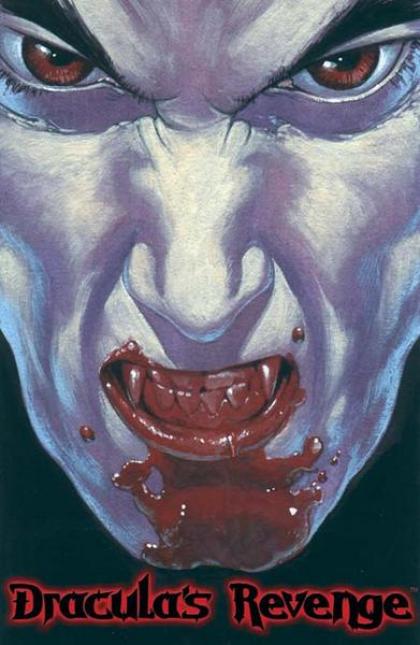 Dracula’s Revenge is a horror-themed, tabletop game of tactical combat. One side plays Dracula and his coven of vampires and other minions who are set to take revenge on London. The other side plays Professor Van Helsing and his faithful friends who rise to put an end to the vampire lord’s threat once again.
Dracula’s Revenge is the first in the "Gothica" series of games. Each entry in the series shares the same basic rules system. This allows you to put the components from the various games together to play whole new games that are larger and stranger than the originals.

Description from the Box
Eleven years after faking his death, Count Dracula returns to London with one thing on his mind: REVENGE! All that stands between him and his goal are Professor Van Helsing and his loyal band of friends. Choose sides and claim your stake. This one's going to be bloody!

Dracula's Revenge is the board game of the desperate war between hunters and vampires in Victorian England. Returning to London eleven years after his apparent death, Count Dracula thirsts for revenge, and he's created an army of undead to help him get it. Prepared this time for the vampire threat, Van Helsing and his stalward friends stand ready to put Dracula back into his grave for the ultimate time!

Gameplay is fast and deadly. Players move characters around a board depicting the catacombs snaking beneath London's teeming streets, battling against each other for their lives. On his side, Dracula has vampires of all stripes - she-wolves, nosferatu, and seductive vampiress - as well as the mindless minions they've enslaved. Against them, Van Helsing leads a force of heroes armed with stakes, crossbows, and a fearsome faith in God.

In the battle between good and evil, it's time to choose sides.

The game comes with: