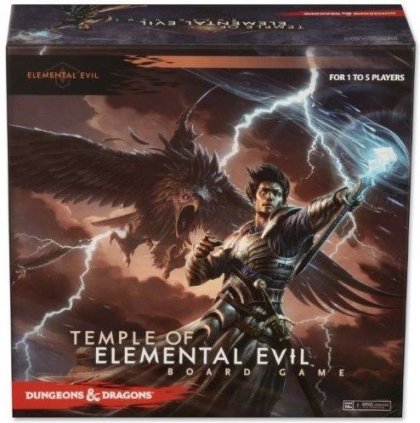 In the Dungeons & Dragons: Temple of Elemental Evil Board Game, you play as a heroic adventurer. With amazing abilities, spells and magic weapons, you must explore the dungeons beneath the Sword Coast where you will fight monsters, overcome hazards and find treasure. Are you ready for adventure?

Temple of Elemental Evil includes multiple scenarios, challenging quests, and co-operative game play designed for 1-5 players. The contents can also be combined with other D&D Adventure System Cooperative play board games, including The Legend of Drizzt and Castle Ravenloft.

Each player selects a hero, such as a fighter, cleric, or wizard. On their turn, each player can explore further into the dungeon (turn over new tiles), move through the already explored parts of the dungeon, and fight monsters. When a new dungeon tile is revealed, there is typically an encounter of some sort, and new monsters to fight are added. Slain monsters reward the players with treasure, and experience points, allowing them to level up and increase their skills during play. Players must cooperate to stay alive, slay the monsters, and achieve the goal of their quest. Each scenario has a different goal, from retrieving a relic to slaying a large boss monster.