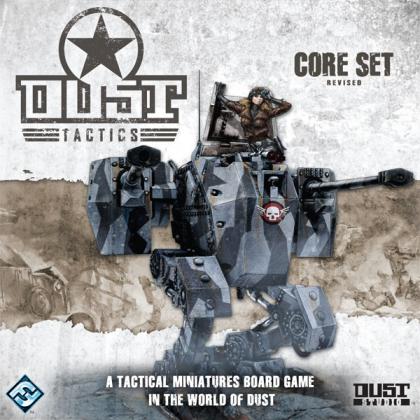 The Allies are ready to lay waste to their Axis foes with their new forces. Meanwhile, the Blutkreuz Korps refuse to be bested on any field of battle. Their new Axis troops are equally powerful. With astonishing abilities and firepower, it will be a struggle deciding which side you want to fight for.

The included terrain posters unique to the Revised Core Set introduce Dust Tactics players to new terrain elements featured in the "Victory Bridge" scenario book. These terrain posters are a new warfare experience due to the new environment they offer players: a bridge and building structures, as well as new terrain symbols. The "Victory Bridge" scenario book offers players six never-before-seen scenarios with which they can carry out a campaign. England's Cobden Bridge has suddenly become the strategic location for gaining access to Southampton. Can your faction take control of the bridge, and gain the advantage of advancing into southern England?