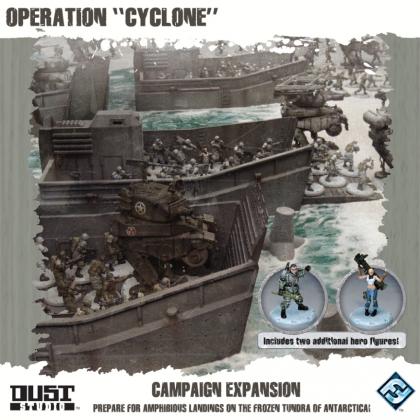 A rich mine of VK has been discovered in the subzero wastes of Antarctica, and its direct access to the sea makes it a dangerous new focal point of the war. As the Axis forces fortify their defenses on the icy shores, the Allies plan a swift and daring amphibious assault in the hopes of claiming the enemy position...

Operation "Cyclone" is an exciting new campaign expansion for Dust Tactics, the tactical miniatures board game of explosive battlefield combat!

Operation "Cyclone" brings the fight from Antarctica's frozen waterways to its icy shores. With an exciting scenario guide including eight new battles, as well as the supplemental rules for artillery, amphibious assaults, and more, Operation Cyclone includes everything you need to expand your Dust Tactics experience!