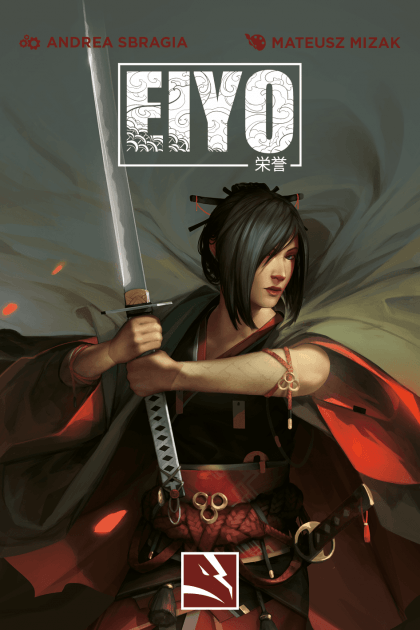 In Eiyo, you will need to confront hordes of enemies, trying not to be defeated, by gaining honour points determined by the opponents that you are taking down.&#10;&#10;Each turn is divided into 2 phases: The samurai phase and the enemy phase.&#10;&#10;In the samurai phase, you will draw 4 cards and then fight. You may never have more than 6 cards in hand.&#10;&#10;During the fight phase you can deliberately attack or deflect your enemies, depending on your choices and possibilities. You choose the amount of cards to spend from your hand.&#10;&#10;To face an enemy you will need to consider the enemy position and discard a Weapon card correspondingly. You can only use one of the positions shown on the card for each Weapon card you discard.&#10;&#10;At any time, you can turn a Weapon card by 90 degrees clockwise to hit an enemy in a specific position by discarding the topmost card of your Weapon deck.&#10;&#10;By attacking an enemy you will defeat only the topmost enemy of the overlapping row and will you gain honour points.&#10;&#10;To deflect an enemy you must discard the corresponding Weapon card, and you must take a Deflect token and place it on top of the corresponding Enemy row. During this turn, you won&rsquo;t receive damage from that row, but you won&rsquo;t get honour points.&#10;&#10;In the Enemy phase, all of the Enemies from the rows without a Deflect token on top, will attack you. The enemies will damage you based on the positions they occupy in their row. You will discard an amount of cards from your Weapon deck corresponding to the damage received by the enemies.&#10;&#10;When using the deflect tokens, discard the topmost card of a row (without receiving honour points), before starting a new round.&#10;&#10;You will lose the game if you run out of Weapon cards for the third time while there are still enemies to fight. To win the game you will need to survive having gained at least 40 honour points.&#10;&#10;&mdash;description from the publisher&#10;&#10;