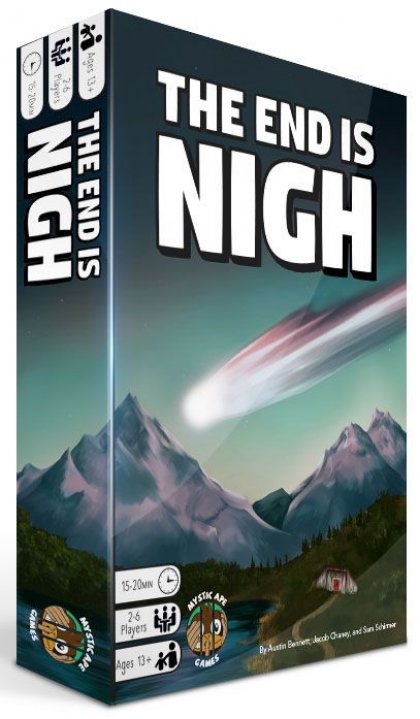 The End is Nigh

The End is Nigh: informazioni gioco e scheda tecnica Indice ↑

Well, the crazies finally got one right. The end is nigh, and they called it. A two-mile wide asteroid will strike Earth at midnight, wiping out humanity&hellip; just like they predicted. You were one of the lucky ones to secure your spot in a bunker, ensuring your own survival. Some late-comers aren&rsquo;t so lucky, though. You need to determine who stays and who goes.&#10;&#10;There are rumors of cult members infiltrating and sabotaging bunkers to fulfill their doomsday prophecy. Choose wisely!&#10;&#10;In The End Is Nigh, players have twelve turns to weed out the cultists among the on-trial refugees. On your turn, you must question a refugee to learn more about them, inform your associates of your findings, and then cast your vote for exile. Beware though! Some of the refugees have effects that can interfere with your investigation, and after being questioned, refugees will remain &ldquo;exhausted&rdquo; for a turn, preventing the next player from questioning them.&#10;&#10;When the clock strikes 6, the refugee with the most exile markers is turned away from the bunker. Questioning then continues until 12, when the second refugee is cast out. If even one cultist manages to makes it inside, humanity is doomed. Who will you vote for?&#10;&#10;

Recensioni su The End is Nigh Indice ↑

Articoli che parlano di The End is Nigh Indice ↑

Eventi riguardanti The End is Nigh Indice ↑

Video riguardanti The End is Nigh Indice ↑

The End is Nigh: voti, classifiche e statistiche Indice ↑