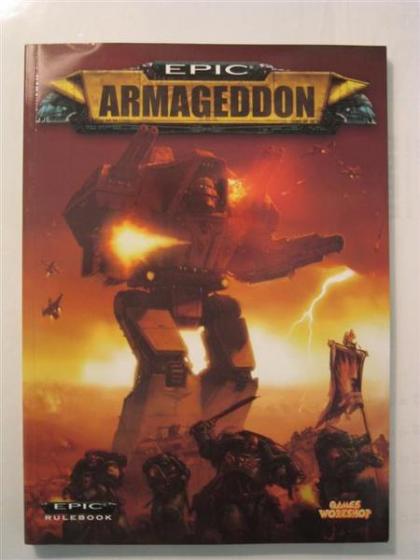 Epic Armageddon is a game of mass combat set in the Nightmare future of the 41st Millennium. These are not simply the battles of man against man. This is the struggle of mankind against a universe full of alien invaders, usurpers and traitors who seek to shatter the fragile Imperium of Man. Epic Battles feature immense armies of infantry, dozens of tanks and giant war engines such as the Titans and super-heavy tanks.
Engage in massive conflicts across entire worlds engulfed in war-worlds such as Armageddon.

The Rulebook contains all the information you need to begin playing games of Epic. In addition it contains historical background, army lists, scenarios and gaming advice about the world of Armageddon and the forces involved in the fierce war there. These include the Imperial Guard armies of the Steel Legion Mechanized Infantry, Space Marines of the Adaptes Astartes, Titan Legions, Aircraft of the Imperial Navy and the forces of the Ork Warlord Ghazghkull Mag Uruk Thraka.
This is the 4th incarnation of Games Workshop Epic battles but it is very different to the others and has brought back much detail that was lost in the 3rd edition Warhammer Epic 40,000. The rulebook is a great accomplishment with full color throughout, excellent stories and a fantastic set of rules that play smoothly and add lots of extra special rules.