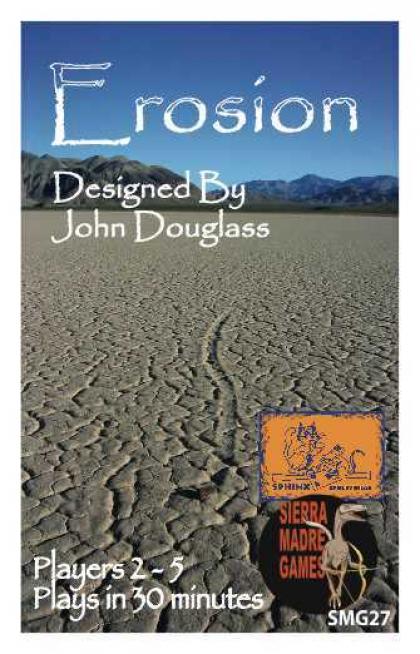 In Erosion, uplift your mountain by eroding those of other players. At the end of each round, gain points for cards in your mountain and delta.

Mountains are far more dynamic than the limitations of human lifetimes would suggest. Their growth and death involve cycles that keep the planet habitable. The machinery of these cycles is called erosion: the weathering of rock and its transport to the sea. Once there, it is subducted into the mantle, where volcanoes return the silicates, sulfates, water, carbon dioxide, and oxygen to the surface.

Almost every step of the erosion process is catalyzed by water. For instance, in your turn you may weather rock using crystallization (busting rock by growing evaporated salt crystals), then transport the remains to the River using creep (movement propelled by wet/dry and freeze/thaw cycles). Once plunked in the River, the eroded material is moved as sediment to the sea. Braided rivers carry the maximum sediment load, but they are the least stable (and the trickiest to play).

The role of erosion in atmosphere control is often overlooked. Every mountain is a titanic terraformer and greenhouse gas scrubber. Weathering removes 100 billion tons of oxygen and 800 billion tons of carbon dioxide from the air each year. Although the biological functions of respiration and decay contribute more to the atmosphere than erosion, during many past episodes it was the other way around. Left unchecked, a major orogenic (mountain-building) event removes so much CO2 that the oceans would freeze over in less than an Erosion game turn (6 million years, the same scale as for the game American Megafauna). On the other hand, a major flood volcano such as the Deccan Traps has poured hundreds of trillions of tons of CO2 back into the air, dwarfing the outputs of all human industry combined.