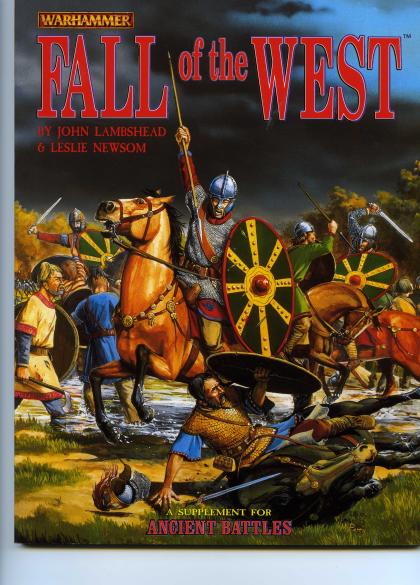 Fall of the West

This 80-page sourcebook contains information, rules and army lists covering the period that marked the end of the Western Roman Empire and the start of the Dark Ages - 350 AD to 468 AD.

The history of the end of the Western Roman Empire

Descriptions of the strategy, tactics, and composition of the late Romance army and its Barbarian opponents.

Biographies of famous Roman and Barbarian warlords, and rules for using them in Warhammer Ancient Battles.

Descriptions of the most famous battles of the period, and guidelines for re-fighting the battles with Warhammer Ancient Battles.

New scenarios and a campaign game for use with Warhammer Ancient Battles based on the border raids and small battles that were typical of warfare in this period.

Watch On The Rhine -- a complete skirmish game.