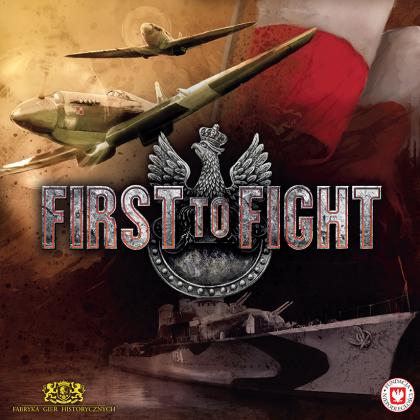 The title of First to Fight refers to the famous slogan and poster distributed in European countries after Poland was the first country to be attacked by Germany in September 1939. This game, released by Fabryka Gier Historycznych (Historical Games Factory)in cooperation with Fundacja Niepodległości (Foundation for Independence), takes place throughout the entirety of World War II, with the players taking the roles of commanders of the Polish forces that are fighting on numerous fronts: Eastern and Western Europe, Africa, etc. By allocating their troops in different regions of the world, they aim to carry out missions (including the most famous battles of WW2) and earn victory points (VPs). The players do not "own" or control the soldiers, which are represented by neutral cards, moved by the players around the board, and activated only when it is the time to play a mission card in a given region; that said, their particular specialization may increase a player's chance to win a mission. The player with the most VPs at the end of the War (May 1945) wins.

The game presents true historical characters, events and places. First to Fight shows the scale of various activities that took place during the war – but it is not a wargame. Over its 40-70 minute playing time, a player will get to know many people and places that played an important role in achieving the victory over Germany. Among the soldiers to command, you can find Antoni Chruściel ps. Monter, August Emil Fieldorf ps. Nil, Jan Kozielewski ps. Jan Karski, Zdzisław Jeziorański ps. Jan Nowak, Stanisław Maczek ps. Baca, Jan Piwnik ps. Ponury, Zofia Rapp-Kochańska ps. Marie Springer, Stanisław Skalski, Elżbieta Zawacka ps. Zo, Witold Urbanowicz ps. Kobra. In order to win the game, you will have to train your soldiers and send them to various fronts – from the cold regions of Northern Europe, through the sun-baked deserts of Northern Africa and peaceful (only in theory!) Western Europe, to Warsaw, always fighting to the last bullet and the last soldier! All characters and events presented in the game were real.