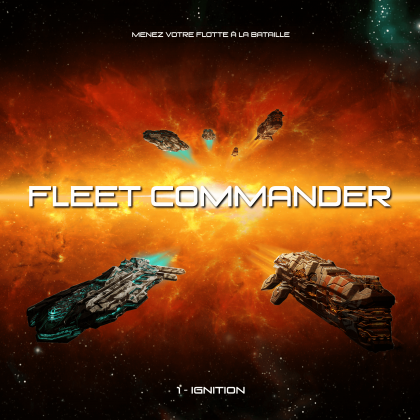 Step into the shoes of an interstellar admiral in just a few minutes. With your fleet of powerful spaceships, enter the zone of battle in which frigates and battleship compete tirelessly under your command for supremacy over the known universe.

Fleet Commander: 1 – Ignition is a space battle game with miniatures for two players. Each player controls a fleet of seven ships on a 5x5 checkered board, which may integrate terrain features such as asteroid fields. In turn, a player chooses three dice among his command dice, throws them and either acts according to the outcomes or saves the dice on his command bridge for following rounds. There are dice to move, attack, and put energy into the shields.

Fleet Commander: 1 – Ignition has been designed to make epic space battles easy to play and to enjoy without having to remove the living room table, acquire many miniatures, or learn complex rules. The whole atmosphere of such battles is transcribed here in one "small" box with a simple but deep game system and beautiful miniatures.

High replayability! With a modular board, six special weapons to equip the battleships, advanced and optional rules and four scenarios, no battle will be the same.

The game system of Fleet Commander: 1 – Ignition is flexible and allows many extensions, with four in the works ahead of the game's release in late 2014.