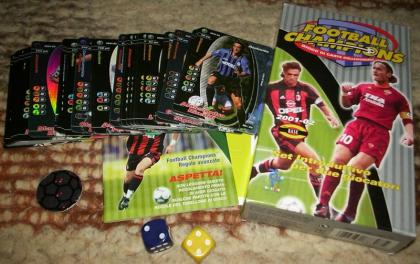 Each team will start with a number of player cards and action cards. Each player is rated on the card for skills like tackling, shooting at goal, being a better in one area of the board, and so on. The action cards are used for tactical advantages. Movement of the players is die driven. There are slightly different rules if you are a defending team than if you are an attacking team, because the attacking team is currently in possession of the ball, the defending team's objective is to 'steal' the ball and become the attacking team now.
The game ends when one player runs out of action cards and a certain number is rolled on a die. Thus you might or might not, get an extra turn(s) before the game is finally over.
The one who scores the most goals, wins of course