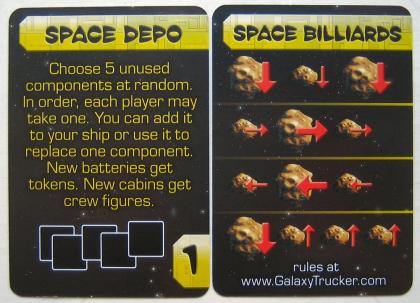 Those who pre-ordered the game for Essen Spiel 07 received 2 bonus flight cards, which add even more variety to the game.

The Bonus cards are included in Galaxy Trucker: The Big Expansion.

What to Do with Them

Leave the bonus cards out of your first game. There is no sense in making the first game too complicated, and you can look forward to using them.

The first time you decide to include the bonus cards, we recommend adding them to the Round 3 flight cards. This will give you 18 instead of 16, but you can be certain that they will turn up. This will make Round 3 a bit longer and more intense.