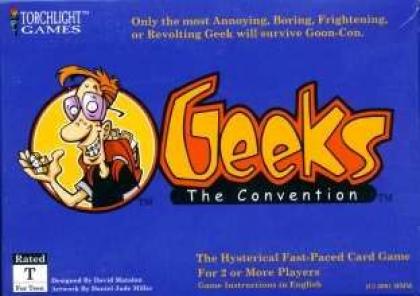 A fast-paced, comedic non-collectible card game where you, the player, control a Busload O' Geeks trying to survive Goon-Con, the greatest game convention in the universe.

While at the convention, your Geeks will participate in various exciting games, attend thrilling geeky events, and hopefully escape from unexpected freaky disasters.

That won't be easy, as rival Busloads of Geeks have arrived for some gaming action (controlled by the other players) and they will do everything to Annoy, Bore, Frighten, or Revolt your Geeks out of the convention.

Once play begins, the battle is on to see whose Geeks will be the last die hard gamers at Goon-Con.