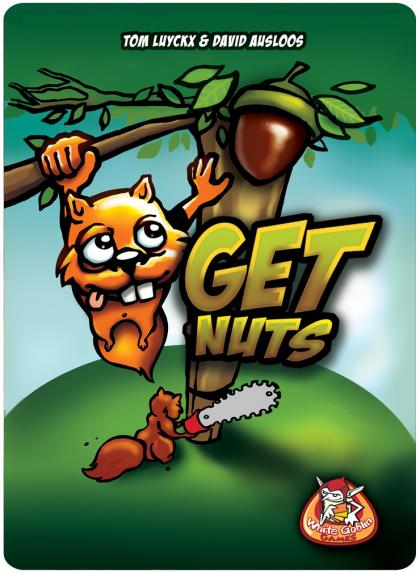 Get Nuts is a fast-playing tactical card game for 3-6 players that puts you in the role of a determined squirrel, trying to get hold of a stack of nuts to get through the cold winter. But other enemy rodents will do anything they can to stop you from climbing that tree and snatching those precious snacks.

To claim a nut card in Get Nuts, a player must move his squirrel down a trail composed of four cards in order to reach the nut stash in the center of the table. Squirrels don't just saunter down shady paths, however, so you need to play tree cards on the path to give the squirrel a way to navigate toward the nuts. On a turn, a player has four action points available, with which he can play cards from his hand (which cost 0-4 points) or advance his squirrel down the trees on his trail, with each space costing a point. At the end of a player's turn, he can discard any number of cards he wants, then refill his hand to five cards.

Cards can either help you or attack opponents. Use a sacred tree to provide a safe haven that others can't destroy, and place the Divine Nut on your path, a special treat that can be claimed only after taking a nut from the stash. Take chainsaws and flamethrowers to opponents' trees, or send a bullzoer up their trail to demolish trees one by one over several turns. If your squirrel sits in a tree that's felled, it moves back down the trail and will remain injured until you take the time to administer first aid and get the little guy up and running once again.

If you claim a nut, your squirrel scampers back to the start of the trail, and you must remove trees from your trail equal to the value of that nut. (Trees wither from loneliness when they lose their nuts.) The game ends once the last nut card has been claimed, and the player with the most valuable stash wins.