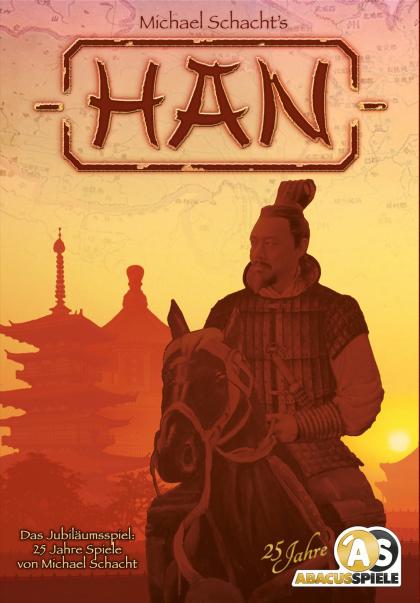 For the most part, Han uses the same gameplay as China, also from designer Michael Schacht, but the maps on the double-sided game board introduce new rules and variants.

In general, players use cards to place pieces (houses or emissaries) into the nine regions on the board. To place in a region, a player must play a card of that region's color or two cards of the same color as a joker; a player can place at most two pieces in a region on a turn, but only one piece if the region was unoccupied at the start of the turn. One side of the game board — titled "Grenzstreitigkeiten", or "Border Disputes", and made for 3-5 players — includes house sites that straddle two regions; to claim one of these locations, a player must discard two appropriately-colored cards. The number of emissaries in a region is limited to the number of houses of the same color in that same region.

"Grenzstreitigkeiten" has one variant. Each player starts with one fortification in addition to his other pieces. Once per game, a player can play two matching cards, then place his fortification on a house site, then top it with a house. Whenever this house scores — whether for the region majority, for being a port city, or for being part of a sequence — the house's owner scores double the points he normally would.

The other side of the game board — "Wege der Diplomatie", or "Ways of Diplomacy", which is made for 2-4 players — also has a variant, with each player receiving a marketplace. Once per game, a player can play two matching cards, then place the marketplace on a house site, then top it with an emissary (not a house). This allows a player to compete for emissary points in a region that is otherwise full.