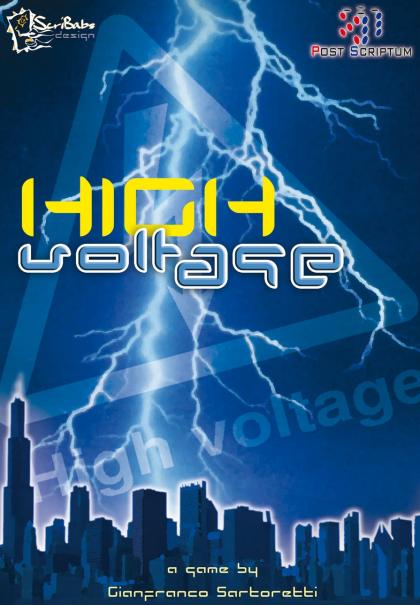 From the back of the box: "The era of the old gas lamps is over: the city discovers electricity.
Four power companies are fighting hard for concessions…
HIGH VOLTAGE is a high-strategy game where tactics and interaction are your cutting edge."

Install longer power lines and supply as many neighborhoods as you can with your power company!
Each player acts secretly for one of the four power companies indicated by different colors (red, yellow, green and blue).
Turn after turn the players place the High Voltage cards, so that they form electric lines with the colored segments on the cards.
Whenever two power stations are connected via an electric line, points are assigned to the companies according to the color of the segments (such points are indicated by the colored score markers); the player also receives points, according to the length of the line (such points are indicated by the point tokens).
At the end of the game the players reveal the color of their company and add the points in their possess to the score indicated by their score markers.
The player with the highest score is the winner.