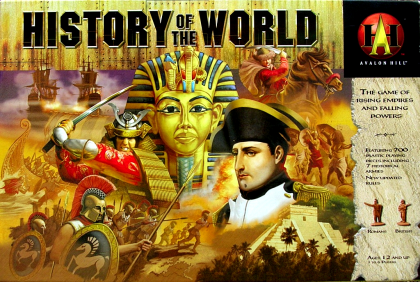 History of the World

History of the World works under the assumptions that all empires eventually fade and that the only things differentiating great empires from lesser ones is how much territory they conquer and how long it takes for their civilizations to disappear. The game is played out over 7 epochs or rounds, from the ancient 3000 B.C. Sumerians to the pre-WW1 Germany, with every player controlling a new rising empire from history. Some empires are stronger than others (like the Romans), but the game's clever mechanisms can help balance that out. At the end of each epoch, players score points for all units of their color (from both the current and any previous empires) remaining on the board.

Gameplay: Each player selects a color and takes all pieces of that color, as there are different miniatures for each of the 7 Epochs, these should be sorted by Epoch. The game board is a stylized version of the globe. The Event cards should be separated into Greater and Lesser Events. Each player is dealt 3 Greater Events. These are either Minor Empires, Leaders, Weaponry or Reallocation. Each player is also dealt 7 Lesser Events. There are 22 different types of Lesser Events (Disasters, Diseases, and Special abilities, to name a few). Players roll 2 dice and determine first player and begin drawing their first Epoch empires. One unique mechanism is that the drawing player can examine their drawn empire and decide whether to keep it for themselves or give it to another player who hasn't gotten one yet. If it is given to another player, the receiving player has no choice but to keep it for himself to play that Epoch. Then the next player draws and makes his decision. The player who gives their drawn Empire has to wait until given an empire by another player or until the last player draws. Each Empire card contains the Empire name, how many troops the Empire has for expansion, the Empire's starting land space, if it has a Capitol or not (barbarian or nomadic nations frequently do not) and if it has any Navigation (Seas and Oceans to travel by). One player reads out the Epochs Empires in order and turns are taken, in this roughly historical order, when a player's Empire is called.

Before the start of their turn a player may play up to two Event cards from their hand. The Events played are resolved before the player starts his Empire's actions. If the player's active Empire has navigation a ship token is placed in each sea or ocean listed (if an ocean is listed all adjacent seas to the ocean have ship markers put into them). A Reallocation Greater Event allows an Empire with Navigation to exchange Fleets in seas and oceans for Coins that can be used to buy back defeated troops (1 coin per troop). If the active Empire has a capitol it is taken and placed in the Empire's starting land with one unit of the Empire's available troops.

At any time the active Empire player may exchange an unplaced troop for a fort. On later turns, a fort gives the player a +1 to defensive rolls in that land. Also, if the defender in a fort loses or ties with an attacker only the fort is removed and the battle continues. Whenever an army conquers a land with a capitol the capitol mini is flipped reducing it to a city (if it was a city to begin with it is removed from board when conquered). After the active player's Empire is finished with it's actions check to see if it conquered to land spaces with resource symbols, if so it can build a monument.

Then scoring takes place. Each area (Middle-East, Northern Europe, Eurasia, etc...) has a tile with 3 values for the current Epoch. One value is for having a presence in the area (at least one land). Another value is for having Dominance in the area (at least 2 lands and more than any other player in area). The last value is for having Control of an area (at least 3 lands and no other player has any in area). These values vary from Epoch to Epoch and Area to Area (Middle-East is more valuable in early Epochs and fades in later Epochs, for example). Total the scores from each area for all pieces of the player's color from all Empires controlled that remain on board. Then add 2 points for each capitol controlled, 1 point per city and one point for each monument controlled. After all areas are scored the next Empire called takes its turn.

After all players have taken their turns and scored, for the first Epoch, the player with the highest score gets to take a pre-eminence marker and places it in front of him. These are secret bonus points (worth somewhere from 3 to 6) for the end of the game and may not be examined till then. This bonus to leader helps balance the Empire-draw mechanic and makes it valuable to score maximal points even early in the game, rather than tanking to get a better draw later. Then drawing begins for the next Epoch with the player having the lowest score drawing first on up to the person with the highest score drawing last (and likely being given a less than optimal Empire by another player).

Voti e commenti per History of the World