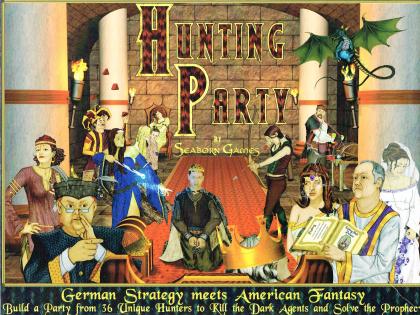 Hunting Party has simple, yet elegant, mechanics that come together to create deep, interactive gameplay. In Hunting Party, players race to kill the Dark Agents and solve the prophecy by building the destined party from 36 unique Hunters. Players will hire hunters by bidding with shares of the King's Bounty. These hunters will give players the skills they need to hunt, and the abilities to make a difference. With your share of the bounty, you can buy items that will increase your party's skills, abilities, or even level up your hunters into champions.

Hunting Party is psychologically intense in the bidding of hunters, misleading of the prophecy, and in making deals of both cooperation and aggression. Players must balance the utilization of their shares and gold while planning carefully how they will use their hunters' abilities and their items to create opportunities and combos. However, the main challenge of Hunting Party is the use of Multiple Build Paths. Players are repeatedly asked,

How do you want to play?

Do you want to build a large party, a cheap party, a party of champions, a diversified party, or a specific one?

Do you want to focus on ability combinations, killing Dark Agents, or attacking other players?

Do you want to hoard gold, hoard items, or solve the Prophecy?

It's all in how you want to play!

Each game, you'll start off with a different Hero, a variable game board, and a different prophecy to solve, ensuring that you'll never play the same game twice.