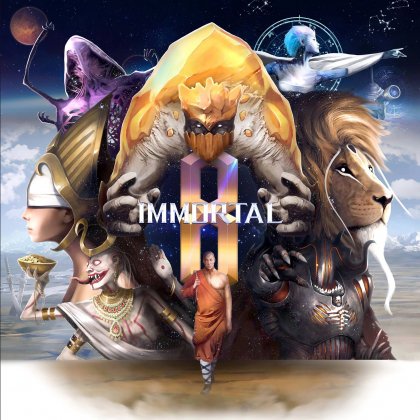 Immortal 8 is a civilization drafting game for 3 to 6 players ages 14+, with an estimated time of 8 minutes per player.&#10;&#10;At the beginning of the game, players receive a secret Immortal card which tells them how to score victory points, among many other ways to score points.&#10;&#10;During the two rounds of the game, they will play a maximum total of five cards by drafting them. A round of Immortal 8 is divided into three phases :&#10;&#10;1) Living Draft: Each player drafts five cards (four cards during the second round) and can play a maximum of three cards (two during the second round). The players gain bonuses from played cards and gold coins from cards they drafted but did not play.&#10;&#10;2) Kingdom: Starting with the first player, each player takes all actions at once before the next player takes their turn. In any order, the active player can activate all cards in their player area, only one wonder, and opponent's buildings by paying the trading cost.&#10;&#10;3) Supremacy: The player with the most military tokens gains a supremacy token, then the player with the most science tokens gains a supremacy token.&#10;&#10;At the end of the Supremacy phase of the second round, the game ends and players gain VPs this way:&#10;&#10;&#10; Immortal scoring&#10; Wonder tokens majority&#10; Supremacy tokens&#10; Diamonds&#10; Culture points&#10; VP tokens&#10;&#10;&#10;The player with the most VPs wins!&#10;&#10;