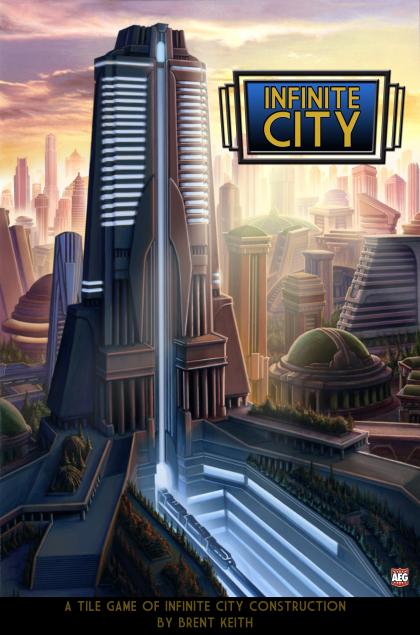 A rich new world has opened up. Resources are plentiful, the economy is booming, and the capital city of this new world is expanding like never before! Even though many corporations scramble to stake a claim in the exploding prosperity, only one can claim ownership! Who will take over the Infinite City?

Will you place the capital next to the port, claiming both as your own? Will you use the transit station to move another player’s military base out of the way, or place your embassy to steal his temple? Will you try for a greater area under your control, or move to capture key buildings?

Infinite City is a standalone tile game in which players become the leaders of corporations building an ever-sprawling city, maneuvering to control the largest districts while holding on to the most valuable buildings.

Infinite City uses tiles to represent buildings, and colored pegs to represent control by players. The tiles are mixed, five tiles are dealt to each player, and five tiles are placed face down in the shape of a cross at the center of the play area. On their turns, players play a tile face up adjacent to one of the five starting tiles or a previously played tile, play one of their colored pegs on the tile, and follow the instructions on the tile. These instructions may lead to playing additional tiles, drawing tiles, moving tiles previously played, turning face down tiles face up, taking tiles from opponents, preventing actions or even exchanging hands of tiles with other players. When players finish their turns, if they have less than five tiles in their hands, they draw additional tiles so that they end their turn with at least five tiles.

The game ends when one player places the last of his colored pegs, or the fifth Power Station tile is played. Each player is awarded points for contiguous groups of at least three tiles controlled by him at a rate of one point per tile. Some tiles have a point value number in the corner; players receive the number of points indicated for such tiles that they control. Also, some tiles have silver rings; the player controlling the most of these receives one point per such tile.

The player with the most points wins.