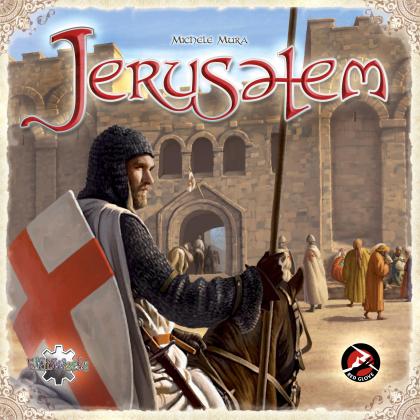 Jerusalem in the 12th Century was a city embroiled in intrigues and power struggles. The Crusader Houses established themselves as the city's rulers, but who would rule over them? Now you must join in the power politics of the holy city, using your resources to control the most important districts and building a castle that towers over your opposition. Prove yourself the most capable Baron, and take your rightful place as the ruler of Jerusalem!

OVERVIEW
The goal for each player is to control the key Sectors of the city: the King, the Church, the Market, the Military, the Nobilty and the Tower of David. This control is achieved gaining the favors of the most important roles of the city (such as the Constable) and by placing Men and Barons into these Sectors. Who owns the most forces gets the Revenue of that area: Men, Gold and Tower-Points. The players can use these new resources to improve their position in the city. At the end of each round the players can rise their Towers building new floors. Also players will have to manage the Special Privileges and bad Events that will take place at end of each Round.

At the end of the game, the player with the highest Tower will be the winner and his family will rule the city!