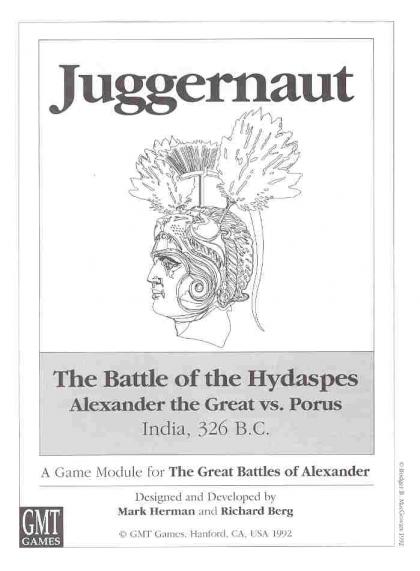 "Juggernaut simulates Alexander the Great's final, major battle - The Hydaspes. Having gained hegemony over virtually all of the civilized western world through a series of stunning victories the late, Great King of Persia, Darius III, Alexander heads east, mostly to satisfy his compulsive curiosity and need for conquest. Gobbling up tiny tribes, running into a few pockets of guerrilla resistance, but pretty much advancing at will, the Macedonian juggernaut heads into what is now known as India, only to be met at the River Hydaspes (today the Jelum) by the army of the local - and powerful - rajah, Porus. His crossing thwarted by the presence of Porus' elephant corps ling the banks of the deep and swift river, Alexander uses a ruse to effect an upriver crossing and force Porus into pitched battle."

100 red and blue die-cut counters that must be augmented by counters from previous modules.

The Great Battles of Alexander