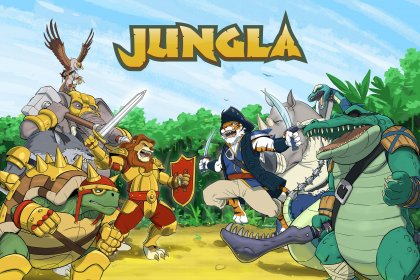 On the summer solstice, the longest day of the year, on the wild, faraway island of JUNGLA, two fearless packs – the KNIGHTS commanded by the powerful LION CAYDEN and the PIRATES led by the cunning TIGER DHURTA – battle for the TAWA HALLAE, the scepter of power of the animal world. THERE CAN ONLY be ONE KING! A terrible struggle is underway to reach the enemy hunting squares. Animals fight duels to the bitter end, in which each animal has unique fighting abilities. Luck won’t decide the outcome of this contest. Let the battle cry ring out: Brave in the melee, loyal to the KING! Only the side with the most courage, strategy, cunning, and speed will emerge victorious. SUMMARY OF RULES There are 2 packs, each consisting of 15 animals. Each animal moves in different directions and a specific number of squares depending on its abilities. The direction and number of squares permitted for each move depends on whether the animal starts from a land or a water square. Hit animals are imprisoned and removed from the board. The aim is to take the animals in your pack from the den squares to the enemy hunting squares, achieving a point. The first pack to score 5 points or to imprison all the enemy animals wins. —description from designer