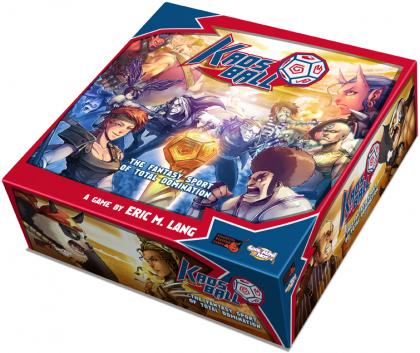 Brought to you by acclaimed designer Eric M. Lang, Kaosball uses exciting card-based play mechanisms to put players in the role of a coach, managing their unique, game-altering team from scrimmage to sudden death period to outscore their opponents. Players need to balance scoring and killing their opponents, using powerful cheating effects all the while – as long as you have the money to pay off the ref. No two matches will play the same!

Kaosball includes multiple modes of play: traditional head-to-head, partnerships-based alliances, and "Maximum Kaos" three- or four-player mode; 30-60 exhibition games complete with a pregame draft for ringers and team upgrades; and league play with up to eight players and upgrades that stay in place from game to game, creating a unique sense of progression.