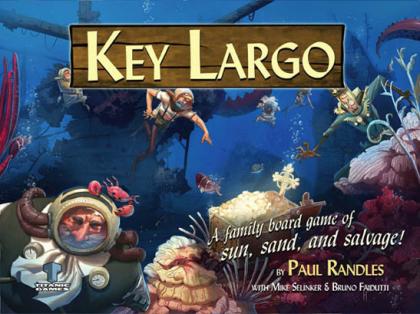 Created by Paul Randles, designer of Pirate's Cove, and developed by Mike Selinker and Bruno Faidutti, Key Largo transports players into the Florida Keys in 1899. As the new century dawns, players ply the thriving trade of finding treasures in shipwrecks around the island. Before a hurricane hits, players need to search the many shipwrecks and sell the lost treasures to the island denizens for as much cash as possible.

This was designer Paul Randles' final game before passing away in 2003. Tilsit Editions published it in French, German, and Italian in 2005, and Titanic Games made it available in English for the first time, with an all-new graphic design and pieces.

The setting :
The action takes place on a Caribbean island, in the very last days on the 19th century. The island has long been a pirate's harbour, and it has recently be found out that there were many sunken galleons around. Hurricane Katty is due in ten days, so you have little time to hire a diver team and bring back as much sunken treasure as possible.

The systems :
Key Largo is a double-guessing game, like Paul Randles' other game, Pirate's Cove. Every morning, each player secretly decides what he will do the coming day - take tourists dolphin watching, search a wreck for treasures, sell treasures at the market, buy equipment at the local shop, or go to the tavern to hire more divers and listen to the rumours. It's also a light management game, where you start with little cash and must make your money grow through fruitful investment. The winner is the richest player when the hurricane breaks through and stops all diving around the island.