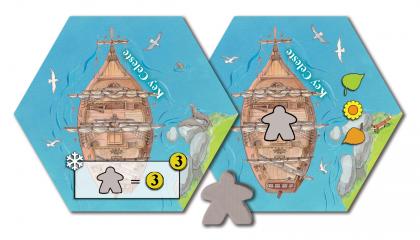 Discovered drifting out to sea, unmanned and apparently abandoned, the Key Celeste ship was towed to shore. Her cargo was untouched and the personal belongings of passengers and crew were still in place. What had caused the crew to abandon ship? The terrible truth was soon apparent. The Key Celeste had become a ghost ship!

Key Celeste, a mini-expansion for Keyflower being released at UK Expo, comprises one large Key Celeste hexagonal tile, one oversize grey ghost keyple, and a rules sheet. Players bid for the Key Celeste tile and obtain the ghost in the same way that they bid for the turn order tiles. The owner of the ghost can use it to frighten away and replace another player's winning bid. The player who played the ghost takes the replaced worker(s) and places them behind his screen. These workers are now available to play by that player in the usual way. Points are available at the end of the game for the owner of the Key Celeste tile and additionally for the ghost if they own both.

Key Celeste adds more interest and considerations to Keyflower and changes this popular game in more ways than gamers are likely to initially anticipate!