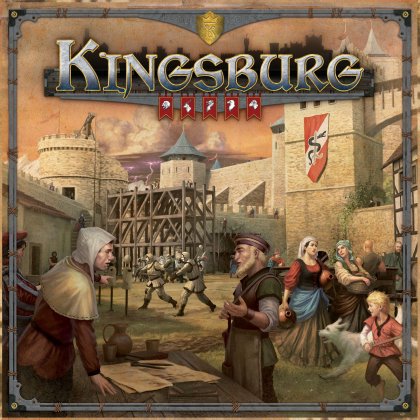 The realm of Kingsburg is under attack! Monstrous invaders are gathering at the borders, aiming to invade and plunder the realm! Your king has chosen you to take charge of a province on the border; you will manage your province and help defend the realm. To accomplish this, you must influence the King's advisors and the Royal Family to obtain gold, wood, stones, and soldiers to expand and defend your lands. But you are not the only governor seeking the aid of the advisers! The other players also seek to collect the best resources for their own territories.&#10;&#10;King Tritus is waiting for you. Will you be able to be the most influent and powerful governor of the realm?&#10;&#10;The game of Kingsburg takes place over five years, a total of 20 turns. In every year, there are three production seasons for collecting resources, building structures, and training troops. Every fourth turn is the winter, in which all the players must fight an invading army. Each player must face the invaders, so this is not a cooperative game.&#10;&#10;The resources to build structures and train troops are collected by influencing the advisers in the King's Council. Players place their influence dice on members of the Council, and each adviser awards different resources or allocate soldiers, victory points, and other advantages to the player who was able to influence that adviser for the current turn. The player with the lowest influence dice sum is the first to choose where to spend their influence; this acts as a way of balancing poor dice rolling. Even with a very unlucky roll, a clever player can still come out from the Council with a good number of resources and/or soldiers.&#10;&#10;At the end of five years, the player who best developed their assigned territory and most pleased the King through the Council wins.&#10;&#10;Kingsburg (Second Edition) includes six expansion modules for use with the base game.&#10;&#10;