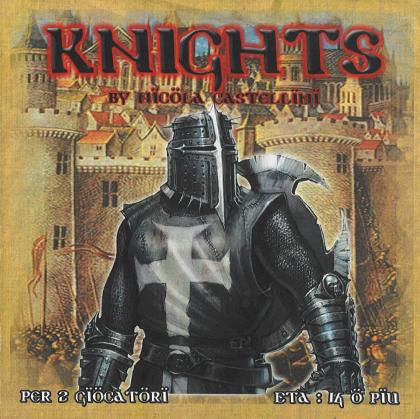 Knights is a Chess-style boardgame for two players, black and white. There are three types of playing pieces: soldiers, knights and one "knight the first", soldiers are pieces dual color like the pieces of Othello. The board is hexagonal and it has triangular spaces.

players must fully deplete the score of the 4-sided dice but do not necessarily of the 6-sided dice
players at the end of their turn must have all his/her own knights completely surrounded by their own soldiers.

"Knight the first" can attack two knights at the same time.

Objective of the game is to conquer opponent's home-base. Another way to victory is to defeat all opponent's Knights.