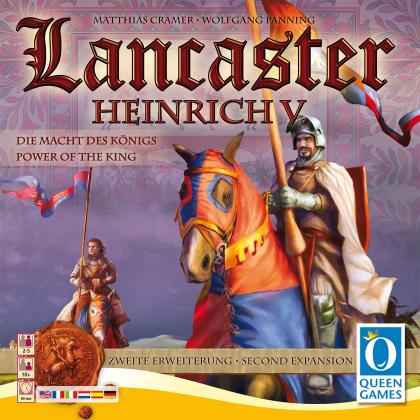 Lancaster: Henry V – The Power of the King

Lancaster: Henry V - The Power of the King, which can be played only with the Lancaster base game, consists of two expansions that can be added to the game either independently or in combination. When used together, eight new laws (which reference materials in the expansion) can also be added to the game.

With At the King's Court, new offices are available to be filled, with the Lords (i.e., the players) applying for them in search of power and privileges. Each player receives a token representing himself, the Lord of his land, and to claim these offices they'll need to bring the Lord token – along with supporting knights and a particular form of tribute, such as a voting marker or gold – to the office in question, whether Lord High Chancellor, Lord High Constable or Great Lord Chamberlain. If you win the position, you'll collect official seals, an archer to use in battle against France, or the first Tudor knight in England. When you upgrade a knight, you may now collect a bishop – and the number of bishops you hold is multiplied by the seals you've acquired for an endgame bonus.

With The King's Resentment, the players now feel the king's wrath after each lost conflict. Lack of support results in dishonor, which can be extinguished only with the help of the tower – an additional location to place knights during the game. At game's end, each player loses one point for each dishonor token held, and the players with the most and secondmost tokens lose additional points based on the total amount of dishonor dished by the king during the game.