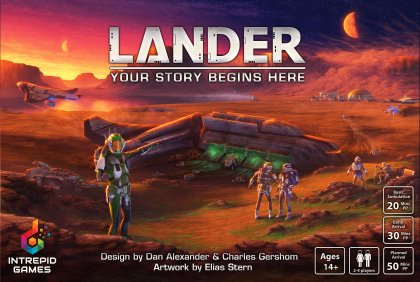 Lander is a 2-4 player, space-themed strategy game that emphasises area control (resource collection), tableau building (crew development) and set collection (missions). You and your friends will assume the roles of corporations, competing to prepare Kaimas-2 (the first planet outside of our solar system capable of supporting human life) for a large-scale colonization effort. The corporation that contributes the most will become the market leader going forward!&#10;&#10;The game includes three distinct game styles with the following victory conditions:&#10;&#226;&#128;&#139;&#10;&#10; Basic Simulation &ndash; the first player to reach 7 Mission Stars wins.&#10; Early Arrival &ndash; the last year is triggered when a player reaches 10 Mission Stars. The player with the most stars at the end of that year wins.&#10; Planned Arrival &ndash; the player with the most Mission Stars after 5 years wins.&#10;&#10;&#10;&#10;&#10;To earn Mission Stars, you must expand your resource base and develop your crew with specific combinations of traits and classes. Unlike many euro style games where players focus on their own playing area and can only affect each other indirectly, Lander enables players to directly impact each other's strategies through various game mechanics, such as take that and variable player powers.&#10;&#10;At it's core, Lander is a game of options. On any given turn, you'll have many potential directions to go in, which gives you a lot of flexibility in how you plan your strategy. It also enables you to pivot when something unanticipated happens (e.g. acid rain reduces the colony's food production, a rival corporation relocates one of your structures, the mission you were working towards gets completed just before you can grab it!). This means that no matter how bleak things may seem, there's almost always a way back in!&#10;&#10;Unique leadership abilities and action cards can be used to pull back your opponents or further your own interests, while event cards will force you to make difficult choices that can impact yourself or the entire colony. Lander is like life. You will experience highs and lows and be faced with a series of challenges that will force you to solve problems and pivot your strategy. It's not meant to be easy (think Matt Damon in the Martian). You are self-interested corporations, struggling to survive on a foreign planet - don't be surprised if the planetary conditions change or your colleagues put something toxic in your soup.&#10;&#10;While some orders in the game are commonly used across game styles and player counts, others are more situational. For example, negotiation provides a novel framework for trading resources and cards between corporations with the use of a timer and collateral. Typically, a 2-player game won't see any negotiation, but it can become very common in a 3 or 4-player game, especially if one player starts to pull away. Observations are often used sparingly in the first couple years, but can become quite strategic in later years, as you study your opponents' actions and try to time your moves just right.&#10;&#10;Lander is a game that often requires a few plays for you to really start appreciating its depth. As you get familiar with the mechanics and cards, you'll start to see there is a game within a game, whereby the study of your opponents' actions is crucial for developing your own strategy. Similar to poker, players can study their opponents' hands, crew and orders to predict what they might be trying do. The interplay between reading your opponents, using your observations, bluffing and playing your action cards becomes the game within the game. Knowing how and when to employ these different tactics is of course, up to you to master...&#10;&#10;Your story begins here!&#10;&#10;&mdash;description from the publisher&#10;&#10;