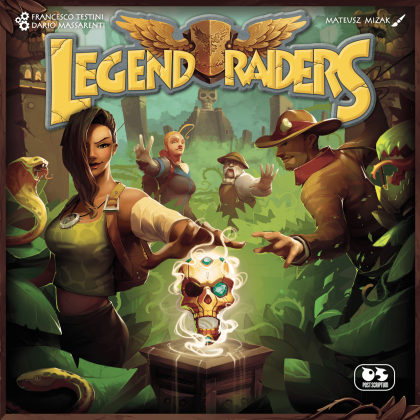 Hail to you, intrepid explorer! You've been selected to take part to the biggest event in the world. The best among explorers, archeologist, and adventurers will compete to decide who's the most excellent. The veil of mystery continues to surround many treasures and legendary places: Will you be able to dig them up and prove that you are the best? &mdash;&quot;Legend Raiders Inc. - Scouting Bureau&quot;&#10;&#10;In Legend Raiders, each player represents an adventurer who wants to collect as many ancient coins (a.k.a., victory points or VPs) as possible, searching for legendary treasures and mythical places. In every round on the main board are four different missions, each composed of a discovery to be performed and two random tools (ropes, shovels, compasses and maps) supplied by the bureau. The explorer who gains the most points wins.&#10;&#10;On their turn, a player chooses between two actions:&#10;&#10;&#10; Take a discovery and place it on the personal board together with the two randomly related tools, or&#10; Perform one or more discoveries with the tools already on the personal board.&#10;&#10;&#10;To be discovered, each treasure requires a specific combination of tools. Places require more tools than artifacts, but will give more VPs in the following expeditions. When a player uses their favorite tool, they gain more VPs; the torch can be used as a joker by turning it off, but only if it's on!&#10;&#10;Discovering new treasures gives the player VPs based on number of ancient coins visible on the personal board, uncovered by the ongoing missions. Solving one mission at a time allows the player to have more visible ancient coins and thus to score more VPs, but having more missions on the board and solving more of them in a single turn gives the player a benefit in terms of time. Each time one or more legendary treasures are discovered, the player also gains a expedition card from the four available at the bureau; expedition cards show goals that grant VPs at the end of the game if achieved.&#10;&#10;At the beginning of each round, the player rolls the adventure die and gains the resulting benefit &mdash; or causes the torches of all players to be flipped over!&#10;&#10;The game ends when the first player has dug up six or more ancient treasures. Which strategy will you choose to apply? Will you succeed being the best explorer in the world? How many and which mythical treasures will you uncover?&#10;&#10;&mdash;description from the publisher&#10;&#10;