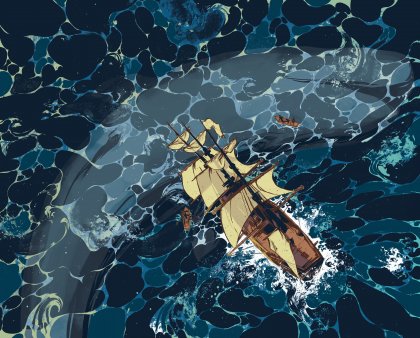 Description from the publisher:&#10;&#10;Leviathan is an asymmetrical 2-player &quot;micro&quot; game, which offers a dynamic tactical battle at sea with a mere 18-card deck. The cards themselves are the &quot;playing pieces,&quot; and movement is measured out in real space on any flat surface.&#10;&#226;&#128;&#139;&#10;Inspired by Herman Melville's famous literary nemeses, one player controls the fearsome Moby Dick and a pod of whales, using hidden movement to elude the opponent, who controls the whaling fleet of Ahab and his crew. Moby Dick prevails by destroying the whaleship Pequod, while Ahab won't rest until the white whale of his nightmares is slain.&#10;&#226;&#128;&#139;&#10;Leviathan offers players a simple set of rules but a rich wargame flavor in about 15 minutes and is highly portable. This is a great piece of introductory level naval combat for both new and experienced gamers across the age spectrum, and a wonderful homage to two of literature's most notorious monsters.&#10;&#10;