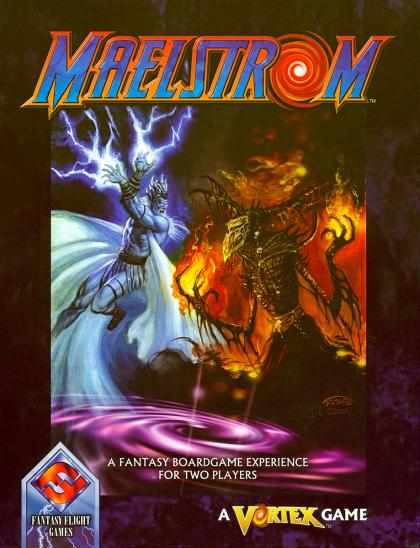 This game was originally published in the summer of 2001 as collectible game "Vortex", and was promoted with free demo-kits distributed to the hobby industry in the spring of 2001. "Vortex" used a clever connected-hexagons-as-board game system that would later inspire other games in the "hexagon mass as a board" category.

Maelstrom is a fixed, stand-alone 2-4 player board game that contains every common and starter flat from the Vortex fantasy battle game - 54 flats in all, over 150 tiles. Maelstrom is the perfect way for strategy board gamers who don't like collectibility to experience the game, and is an ideal way for Vortex fans to fill out their collections.

The Masters of the Void are at war. Using the powers of the Vortex, they tear holes in the fabric of existence, recruiting powerful allies and enslaving lands, cities, and beasts of the wild. Magic, creatures of unimaginable power, and engines of destruction are bound to the Vortex and equally engulfed in the bitter struggle between the Masters.

Designed by Diskwars creators Tom Jolly and Christian T. Petersen, Maelstrom is a game of fantasy battles, magic, and resource management using a unique hexagonal tile game field that grows as players add allies, land, and relics to fill the void that surrounds the Vortex. Game play is fast and furious, as players seek to gain mastery over the battlefield, shaping the very foundation of the Vortex with each strategically placed tile. Only one can rule the void. Will you?"

This is the game Vortex, packaged in a non-collectible format. The box contains a ton of tiles. Vortex includes 92 "flats" of tiles total (16 "fixed", 38 "standard", and 38 "rare); this box contains all of the fixed and standard flats (for a total of 54 flats). Note that events and relics are not included in this game, as they are in Vortex (all events and relics are rare). Otherwise, it's the same game as Vortex, and you can even add Vortex booster packs to this game to increase your collection. That having been said, you really don't need to. Events DO add to the game experience, but they're not necessary -- this is a complete game without any further purchases.