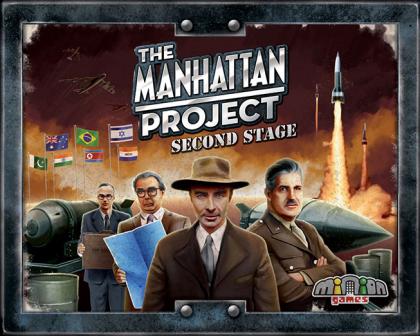 The Manhattan Project: Second Stage consists of four small expansions that can be added to the base game individually or together.

Nations 2 works like the previous Nations expansion, with each player getting one card to represent a country and gain a special power. Seven new countries and powers are represented.

Rocket Technology allows you to build a rocket factory when taking the "Design Bomb" action. Rockets work exactly like bombers - but fighters provide no defense against them.

H-Bomb Technology upgrades the "Design Bomb" action, allowing a player to return an available bomb to the bottom of the deck in order to acquire an H-Bomb card. To build an H-Bomb, however, the player needs Lithium Deuteride, which comes from new cards that work similar to Mines.

Personalities adds seven roles to the game based on real individuals who contributed to the Manhattan Project. Each time you retrieve your workers you will select a different role. Each role will grant you persistent benefits until the next time you retrieve.