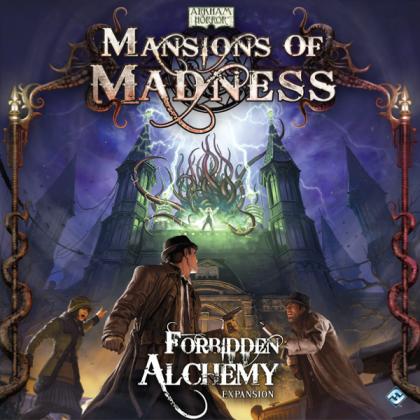 Inside abandoned hospitals, secret laboratories, and forgotten cellars, scientists are conducting depraved experiments that will drag humanity to the brink of the abyss. Only a small group of investigators can discover the truth and put an end to these mad plots before it's too late...

In "Return of the Reanimator", the investigators are tasked with entering a vermin-infested manor to seek the whereabouts of Doctor Herbert West, a reportedly insane scientist whose legendary experiments in reanimation led to his untimely demise.

"Yellow Matter" tells the grim tale of research into strange extraterrestrial beings. But who is the experimenter, and who is the subject?

"Lost in Time and Space" takes your Mansions of Madness experience to mind-bending new heights with the introduction of time travel! Travel back to the mid-nineteenth century or ahead to the mid-twenty-first in your search for the truth behind a strange and dangerous device.

The revised printing of Mansions of Madness: Forbidden Alchemy, scheduled for release in May 2012, includes corrected cards and map set-ups for all three scenarios.