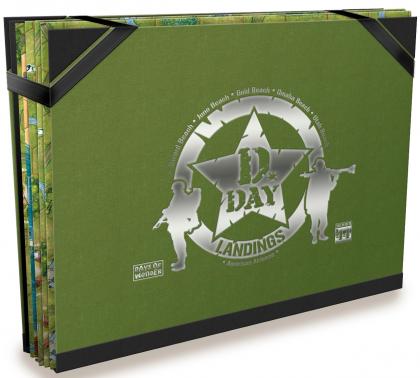 Memoir '44: D-Day Landings commemorates the 70th anniversary of the Allied invasion of Normandy on D-Day (June 6, 1944) with a set of six giant battle maps that can be configured and played on in small, medium and large set-ups.

The battle maps in D-Day Landings introduce the "Extended Breakthrough" format, with the maps being 23 hexes deep and allowing players to undertake battles on a scale and scope never before possible in Memoir '44. The six maps consist of settings for American Airborne, Utah Beach, Omaha Beach, Gold Beach, Juno Beach, and Sword Beach. Each battle can be played individually or assembled with its neighboring scenarios for double- and triple-map battles. With enough players (and enough components), you can link all six battle maps to form a giant board that recreates the entire Normandy coast!

Memoir '44: D-Day Landings requires at least one copy of Memoir '44 as well as the Terrain Pack, Equipment Pack, and Winter Wars expansions. The Mediterranean Theater expansion is recommended, though not required. To play a double-, triple- or sextuple-map battle, more copies of the base game or expansions are required.