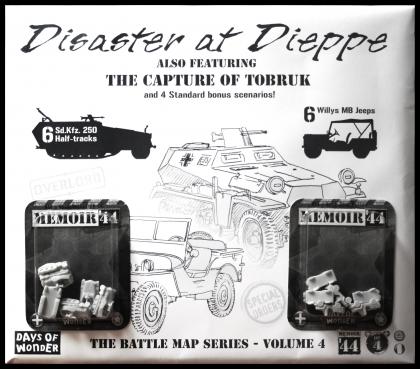 Disaster at Dieppe highlights the ill-fated raid on the German-occupied coastal town of Dieppe, code-named, Operation Jubilee; while The capture of Tobruk features Rommel in June of ‘42 as he relentlessly pushes his Afrika Korps after smashing through the British lines at Gazala in North Africa.

The Battle Map series is designed to encourage team play and accommodates up to 8 players; each map comes ready-to-play with all terrain, obstacles and unit positions pre-printed, making set-up a snap. Battle Map Volume 4 includes 6 half-tracks miniatures, 6 jeeps miniatures and 4 standard scenarios that are playable on a regular Memoir ‘44 board. The 4 Standard scenarios are: Raid on Barce and Rommel’s Right Hook, featuring the new Willys jeeps as long-range patrol cars; and Panzers in the Atlas and Le-Mesnil-Adelée, featuring the new Sd.Kfz. 250 half-tracks. Also included are detailed rules for the long-range patrol cars and half-tracks.