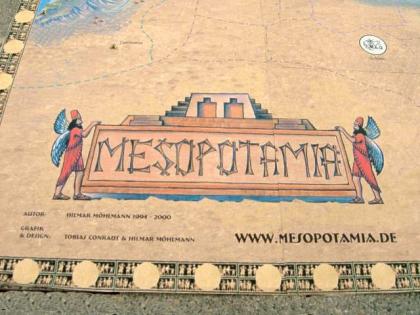 "Crawl into the skin of a Mesoptamian ruler during the age of the great Hammurabi of Babylon. Relive how kings managed to secure their power and gain the respect of their tribes. The construction of temples and canals, agricultural development and military victories can all spread your fame and secure your rule. Make constant decisions on how best to govern your land: rely on the rule of law and the gentle persuading powers of the Ishtar priestesses and strife for a blossoming agricultural system, or turn to the fanaticism of the Marduk priests and the battle strength of their troops. However you choose to exert your rule - you can only win the game if your rule is so successful that your fame, in the eyes of your subjects, has acquired a god-like status, making you the undisputed ruler of Mesopotamia."

This is the first game from Hilmar Möhlmann and has undergone several years of development. Its final version was made available to the gaming community through his website and ebay. Having acquired a copy it is obvious that this is a labor of love. The design of board and cards is beautiful - the rules are well tested, clearly presented and relatively short for such a ambitious game. Ongoing support for players is in place through website updates and direct communication. And having just acquired my copy, I wonder if the price asked actually covers the materials provided. An impressive entry for this budding designer and a one to seek out for players who enjoy games like "Settlers of Catan" but yearn for something a bit meatier and with a stronger theme. With an Arthurian themed game in the pipeline, this one-man act might be an interesting one to follow.

The aim of the game is to have the most military units and construction works of your color on the board. This can be done over 2 to 5 rounds. Resources can be acquired through natural growth, trade and military conquests. Trade takes place along caravan routes. Players can trade freely with their trading partner, pay toll to players whose territory is crossed en-route, or exchange resources against a set course with the bank. These resources can then be used to generate new buildings or units. Each turn a player can use an influence card, adding flavor and variety without unbalancing strategic play. A nice twist is that players who allow toll-free trading between other players if the caravan route passes their territory see a generous windfall from the opening of this trade route in the next round, when some resources are added to the storage in that province. Each year round ends with construction and military campaigns. Conflicts are settled by dice rolls which are modified by markers on the board.

This game appeared in 2 versions:

The self-published "2D" version (quality is at the very high end of desktop publishing).
Some assembly is required, mainly joining the 8 pages that from the superbly produced full colour game board. In total you get 39 multicolour A4 sheets, including several photo-quality prints, six pages of clear and well presented rules, and lots of event cards, markers and game aids.

The wooden case with the handmade "3D" version of the game board is fit for a king, and for those with a rather large game budget.