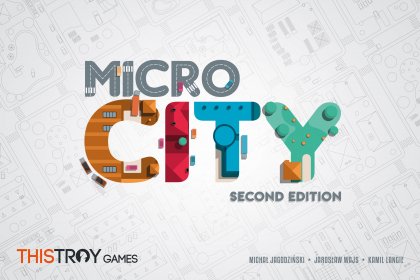 Build your city wherever you want! At home, on the train, on the plane. As the name says, Micro City is a small game about building your city. Several game modes, various challenges, different levels of difficulty and random distribution of districts will make each game different!&#10;&#10;Your goal will vary depending on the mode chosen, but it&rsquo;s all about building structures that you will pay for with materials gained with your actions. You only have a certain number of rounds to reach your goal, so plan every move carefully.&#10;&#10;Micro City second edition introduces 2 completely new game modes and several changes to the base game. It&rsquo;s still primarily a solitaire game but now you can also play against another player or face challenges together in a 2 player coop mode.&#10;&#10;In Micro City you start of by rolling 2 dice. You then play on of the cards on your hand and resolve its effects. Each card causes your builder to move through the city and perform an action - either basic or an advanced one which requires a correct die. You then gain benefits from the city tile your builder ends up on. Be careful as each tile action uses one of your investment tokens and blocks that tile until the investment token is removed. Also bare in mind that you have a certain amount of time to fulfill your current objective so plan your moves wisely!&#10;&#10;&mdash;description from the publisher&#10;&#10;