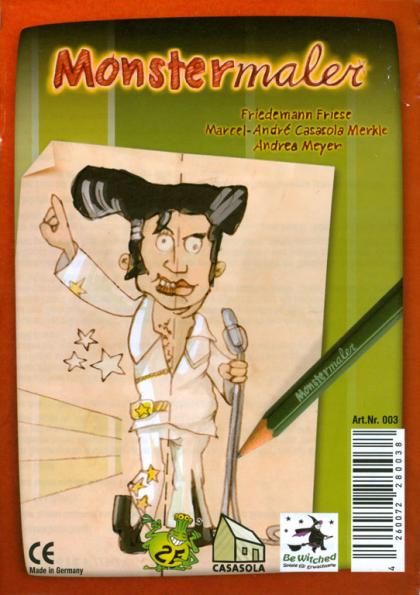 What do you do if you are supposed to quickly draw the left side of Queen Elizabeth II? You draw half a crown, a dress ... but already everybody but you has shouted stop and you only just started to draw the Queen's face. And you still wanted to draw Buckingham Palace in the left corner ... Now it's up to your left neighbor to save you both. Unfortunately, you hear her mourning once she reads whom she's supposed to draw. But maybe some good idea will strike her?

Idea of the game:
4 and more players try simultaneously to recognizably draw one side of a person chosen before. If you are ready, you shout "Stop!". The slowest player must not finish. Fold the sheet, and let your left neighbor complete the right side of the person chosen - without looking at the left side.
Monstermaler is the perfect game for the party, for warming up or cooling down and for people who don't like games. By the way, it's rather a disadvantage to know how to draw when playing Monstermaler.

Components:
1 A6-pad of 120 sheets, German rules are printed on the inner side of the cover. Add a pen and if needed a shade for every player.

While the list of people on the back of each sheet is focused on Canadians, it is more accessible to those in the United States than that from the German edition.