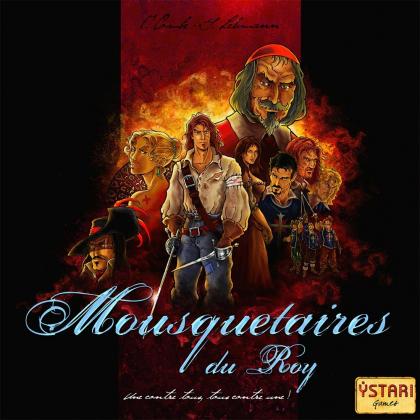 "Mousquetaires du Roy" is based on the novel "The Three Musketeers" by Alexandre Dumas.

The Musketeers (a team of 1-4 players) are fighting against Milady to find the Queen's pendants before the end of the game. Meanwhile, they also have to defeat other plots in several places (Le Louvre, La Rochelle...).

A turn begins with Milady playing plots/cards, and secretly programming a destination.

Then, each musketeer (D'Artagnan, Athos, Porthos, or Aramis) has 3-4 actions to choose amongst: move, draw a card, get equipment, exchange cards/equipment, challenge in one of his four characteristics, fight against one of Richelieu's guards, reinforce La Rochelle... Milady can also reveal herself and send Rochefort to fight the Musketeers.

The game includes rules for an AI-controlled Milady and can therefore be played as a pure co-op.

"One against all, all against one!"