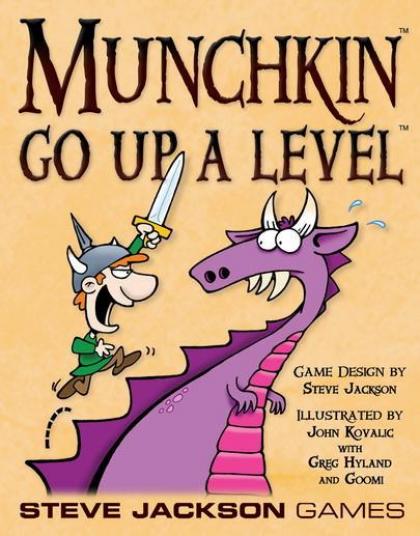 Munchkin: Go Up a Level

NOTE: Only those who own Munchkin games dated before April 2010 need to purchase this set. Games dated on/after April 2010 already include the cards from Munchkin: Go Up a Level.

After The Great 2010 Munchkin Changeover, the publisher didn't want to alienate its existing customer base by making them repurchase Munchkin games they already owned. So they released Munchkin: Go Up a Level, which contains just the changed cards.

Most, but not all of the updated cards are included. Significant exclusions are as follows:

Publisher's Blurb (from the back of the box)

Munchkin came out in 2001. Since then, we've published eight more core games and over a dozen expansion sets. We've learned a lot in the last nine years, and new printings of Munchkin and its sequels will change some cards for clarity or balance.

But we don't expect our fans to buy their Munchkin collection all over again. Instead, we created Munchkin: Go Up a Level. This box contains 132 updated cards from: