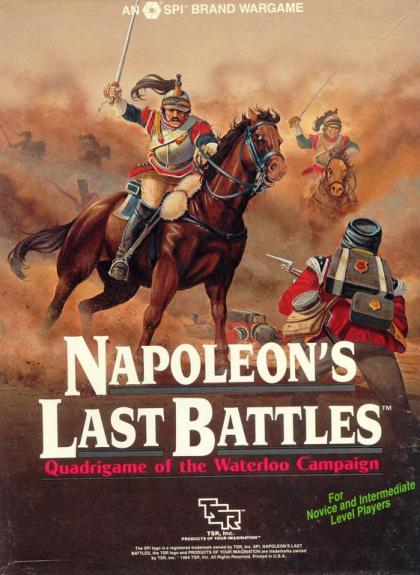 Game on the Waterloo Campaign. Actually Napoleon's Last Battles are 5 games in 1. There are 4 individual battles:

with the campaign game linking all 4 maps.

Napoleon's Last Battles uses the Napoleon at Waterloo system with modifications for command control and Line of Communication. Campaign game starts from Quatre Bras and Ligny and lasts 3 days. Units are mainly brigades.

After a longer break Kevin Zucker came back with his new The Coming Storm, which based on the former "Four Lost Battles" concept, adding baggage- and pontoon trains.
In 2011 The Last Success: Napoleon's March to Vienna, 1809 was published to create a "family" of games called "The Library of Napoleonic Battles" which all could be played under the same rule set. Kevin Zucker announced to republish Napoleon at Leipzig in 2012/13 in a 5th edition for the 200th anniversary of the epic battle and plans to republish Napoleon's Last Battles in 2015 to commemorate the 200th anniversary of the Battle of La Belle Alliance/ Waterloo.

Nevertheless all rule-editions can be used for the original NLB-game.