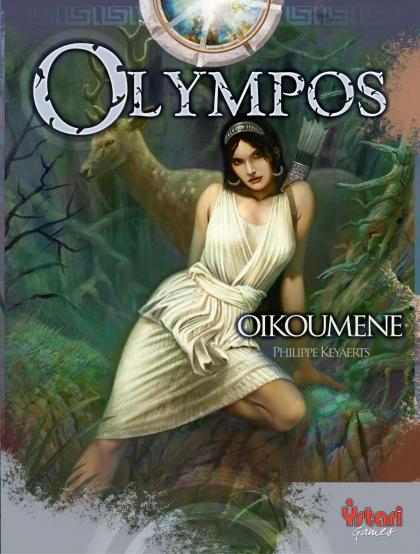 Olympos: Oikoumene is a small set of modules for Philippe Keyaerts' Olympos that can be used only with the base game.

In the base game, players spend time (the game's currency) to take actions, with the choices being expansion or development. Expanding brings new settlers onto the game board, while development takes place on the game's discovery board, with players either buying new scientific discoveries – such as medicine or phalanxes – or building architectural wonders. Each discovery brings you new powers, such as an upgrade in military strength due to the phalanx, and each wonder earns you points.

Olympos: Oikoumene consists of new Discovery tiles (to be mixed with those of the base game with some being discarded before play), new Wonder tiles (ditto), and five objective tiles. Two of the five objectives are randomly chosen prior to the start of the game, and whichever player first meets the stated objective claims the appropriate tile, which is worth 3 VPs at game's end.